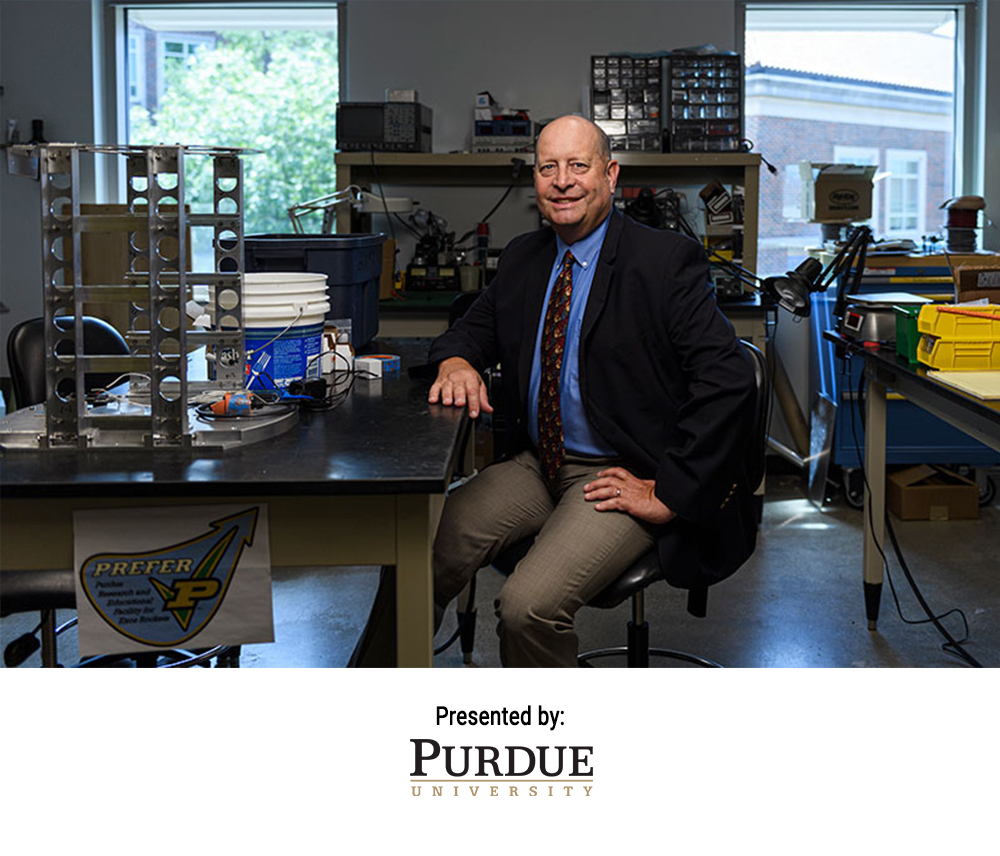 By Purdue University
SAVE

Reaching space to become a reality for Purdue aerospace engineer.

WEST LAFAYETTE, Ind. — Purdue University’s Steven Collicott was 8 years old when he saw Neil Armstrong step onto the moon and dreamed of reaching the stars. Now, both he and his research are going to make a giant leap into space aboard a Virgin Galactic craft.

Collicott, a professor of aerospace engineering in the School of Aeronautics and Astronautics, was selected Wednesday to receive an award by NASA’s Flight Opportunities program giving him the chance to fly into suborbital space and back on a Virgin Galactic craft while conducting a zero-gravity experiment.

Collicott was the only applicant in this round of selections to receive the chance to take a suborbital flight sponsored by NASA. His research was selected as part of a competitive nationwide process.

The selection will make Collicott the first Purdue faculty member to take a trip to space.

“The sudden news that I now get to fly into suborbital space to work in an amazing new zero-gravity laboratory aboard Virgin Galactic is a thrill beyond words,” he said. “That I’ll be one of the first researchers to fly with their own experiments is an exciting notion that I never bothered to consider before.”

Collicott already is known for his high-flying experiment endeavors, having taught a zero-gravity flight experiment course for many years. As part of the course, Collicott and some of his students experience weightlessness while conducting experiments aboard a parabolic aircraft flight, dubbed the “Vomit Comet.”

Those flights reach an altitude only in the range of 30,000 feet, significantly less than suborbital rocket altitudes that begin as high as 50 miles.

Known as the Cradle of Astronauts, Purdue has 27 alumni who have flown in space or have been selected for space flight.

The final decision for Collicott’s inclusion in the Cradle follows guidelines developed over three years ago when commercial space activities increased. William Crossley, the J. William Uhrig and Anastasia Vournas Head of Aeronautics and Astronautics, will apply those guidelines after Collicott’s flight. Inclusion is possible for alumni, faculty, staff and students who work in space.

Collicott, who recently returned from a zero-gravity aircraft flight, plans to start building the experiment soon.

For the flight, Collicott will conduct an experiment that explores a difficult-to-model phenomenon in how a liquid that wets a solid surface less than perfectly moves in an awkward stick-slip process across that solid surface in weightlessness.

The phenomenon can be found with green rocket propellants and water in life-support systems. In spaceflight, this stick-slip spreading process is important even in meters-long fuel tanks.

The experiment serves to help engineers exploit numerous liquid-solid combinations, such as new green propellants, in future spacecraft.  The experiment also will highlight possible ways to automate such measurements in the future, and this automation enables cheaper launches of automated follow-up experiments.

Green propellants are new variations of rocket fuels being researched as non-toxic replacements for long-used traditional fuels, which are dangerously toxic and very difficult to handle.

Purdue University is a top public research institution developing practical solutions to today’s toughest challenges. Ranked in each of the last four years as one of the 10 Most Innovative universities in the United States by U.S. News & World Report, Purdue delivers world-changing research and out-of-this-world discovery. Committed to hands-on and online, real-world learning, Purdue offers a transformative education to all. Committed to affordability and accessibility, Purdue has frozen tuition and most fees at 2012-13 levels, enabling more students than ever to graduate debt-free. See how Purdue never stops in the persistent pursuit of the next giant leap at https://purdue.edu/.